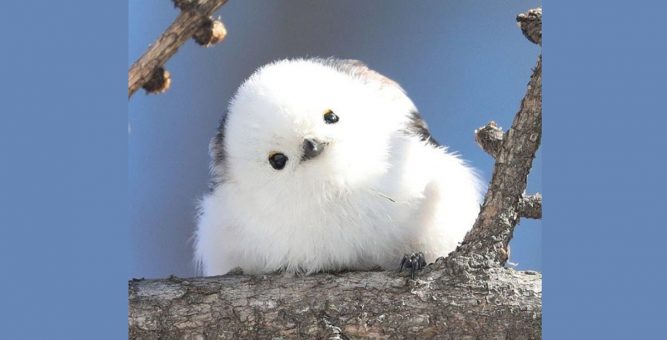 The Japanese island of Hokkaido is the second largest island in Japan. Home to lots of preserved wildlife areas, Hokkaido has 17 quasi-national and prefectural parks and six national parks. In recent years, the island has become famous for its diverse variety of wildlife, including several species that can only be found on Hokkaido. Since most of the island is preserved as national parks, the animals and wildlife on Hokkaido can genuinely thrive. Some of the creatures that live on Hokkaido are brown bears, the Hokkaido Red Fox, the Hokkaido Red Squirrel, the Hokkaido Crying Rabbit (which supposedly inspired the Pokemon character Pikachu!), the Sika Deer, Iizumas, and more.

However, the Hokkaido dwelling creature that’s getting the most attention is an adorable bird known as the Shima Enaga, or Long-tailed Tit. They’re one of the cutest birds in Japan, if not the entire world. they’re like little round fluffs of cotton with eyes and a tail, and they’re super tiny in size. These gorgeous little birds can be found all over Japan, but it’s only in Hokkaido where their faces are completely white. The Shima Enagas that live elsewhere in Japan have cute little black or brown eyebrows. When I say they’re tiny, I mean they are really tiny. These adorable little puffs of bird measure between 13-15 centimeters in length and that includes their long tail.

Japanese folks are obsessed with these adorable little birds, and you can find tons of merchandise devoted to them.

Both the male and female Shima Enaga look the same and because the males and females both help to guard the nest, they have a higher chance of survival. However, because they’re so small, they’re vulnerable to extremely cold weather. When it’s cold for long periods of time, reports suggest that up to 80% of the birds can die. However, they breed well, so when they die out, it’s believed that the populations restore themselves fairly quickly to previous levels.