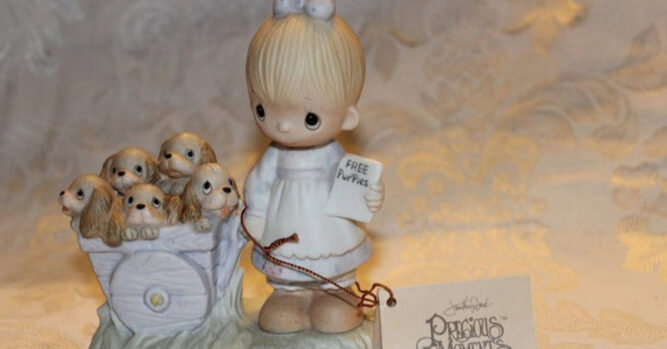 It’s hard to believe how quickly time flies by and for many of us, decades may have passed before we even realize it. Sometimes it is a matter of looking back on the things that we did in our younger years that remind us that those younger years have passed by very quickly. For example, you remember Precious Moments figurines? It’s hard to believe that they were around some 40 years ago and today, they are even considered to be a vintage collectible that could be worth hundreds or thousands of dollars.

Collectibles are always in style and it seems as if certain collectibles go in and out of style on a regular basis. Classic Precious Moments figurines are part of a ‘thriving online market’ according to Today. The amount that you would get for one of these figurines can differ but in some cases, they could be valued at almost $2000.

The particular figurine that is the most popular is “God Loveth a Cheerful Giver”. Looking at eBay sales, it is recently selling for around $200. Then again, $200 for something that is just now collecting dust is nothing to sneeze at.

These items were also very inexpensive when we first purchased them back in the 80s. Aside from that particular one, there are other precious moments figurines that can go for a good price. 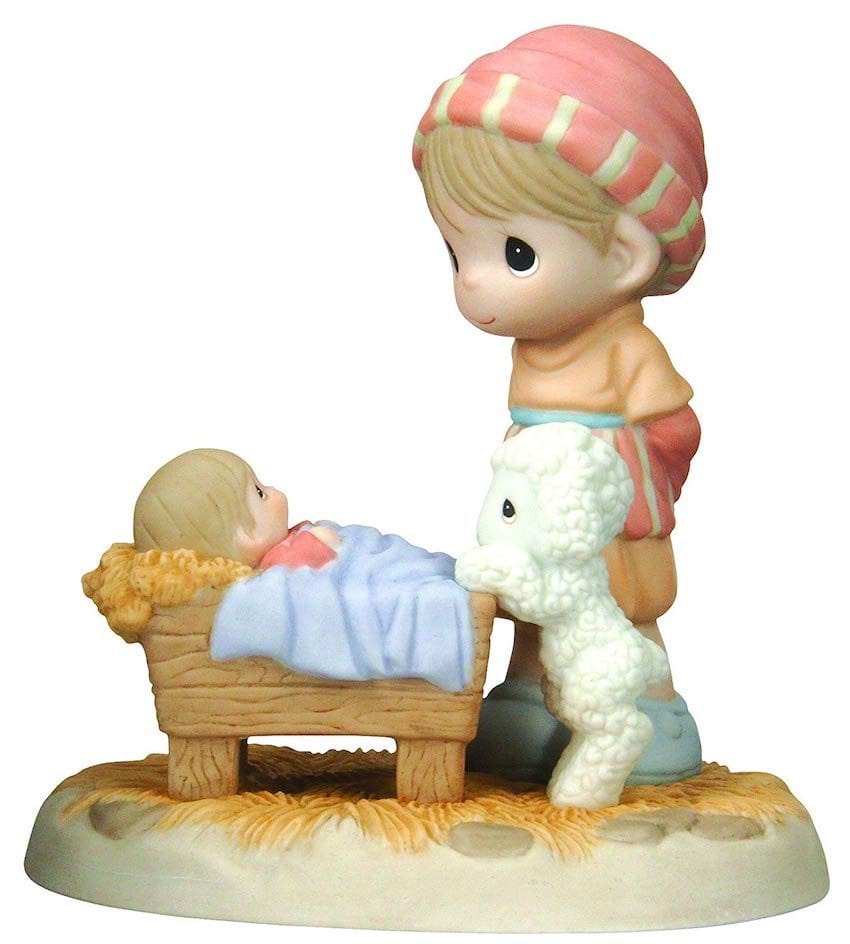 1979 was when the Precious Moments figurines were first released. The Original 21 collection could be found in gift shops in almost every town in the United States. They became a very popular collector’s item quickly. 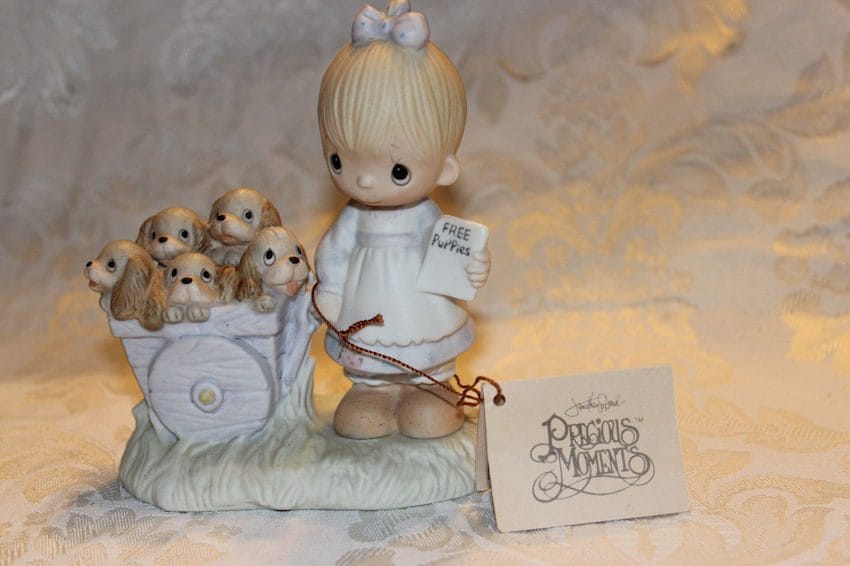 The figurines are not as popular as they once were but now they are considered to be a vintage collectible.

The Original 21 pieces are the ones that are most coveted, including the “God Loveth a Cheerful Giver” figurine. 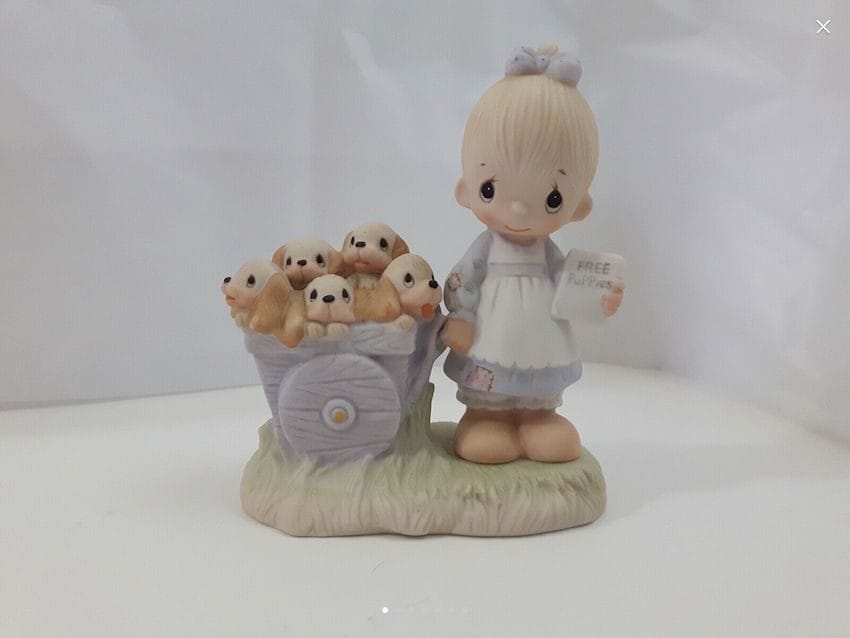 It originally sold for five dollars but you could probably get a couple hundred for it today on eBay. The one shown above is cracked and it is still listed at $155.

In some cases, you may even be able to earn more. That particular figurine had sold for $750 and some place a value of over $2000 on it. 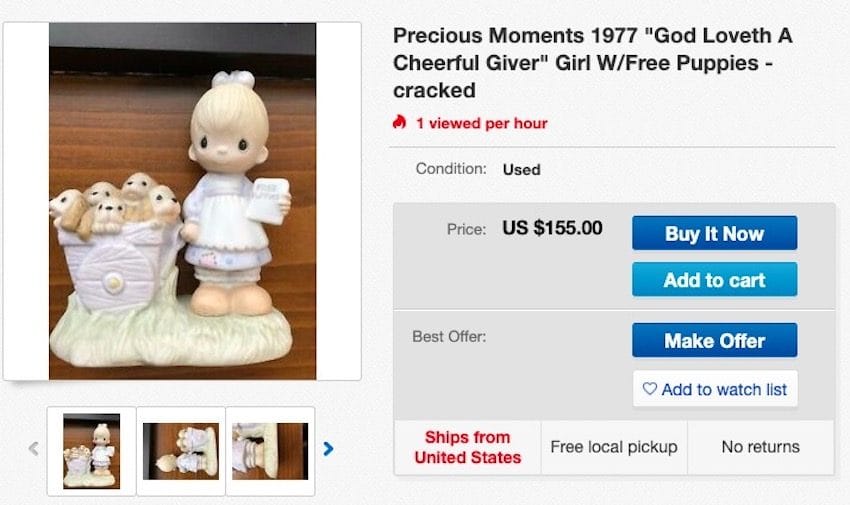 “I don’t believe I have seen one actually sell for more than half of that, although they are still occasionally listed for sale in that price range,” Paul said.

There may be other items in the collection worth a lot of money but the little girl with the puppies is the most valuable.

“There really isn’t another stand-out I can think of that would be close to this price,” Paul said. 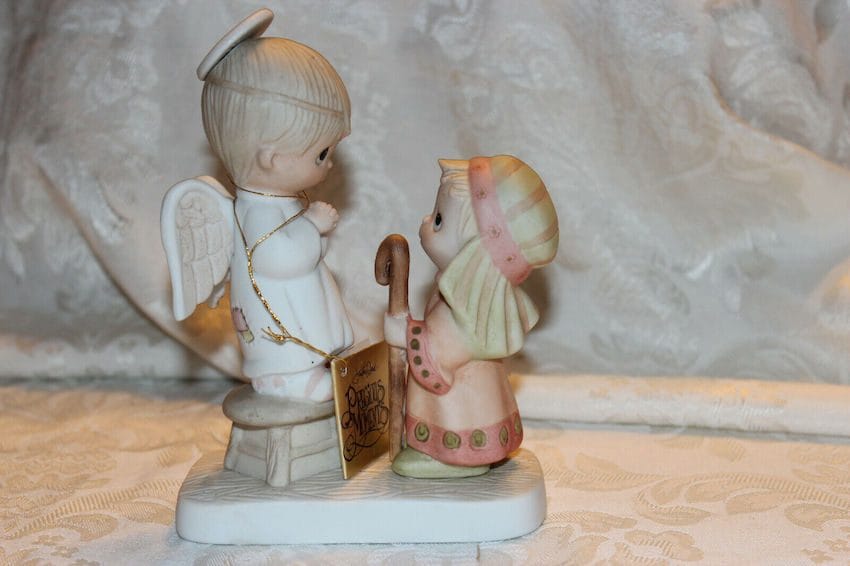 Then again, the majority of the Precious Moments figurines are selling for under $30 on eBay.

If you had a very valuable item, you might’ve made a lot of money. The same is also true if you had a limited-edition or discontinued item or if you had the entire collection. 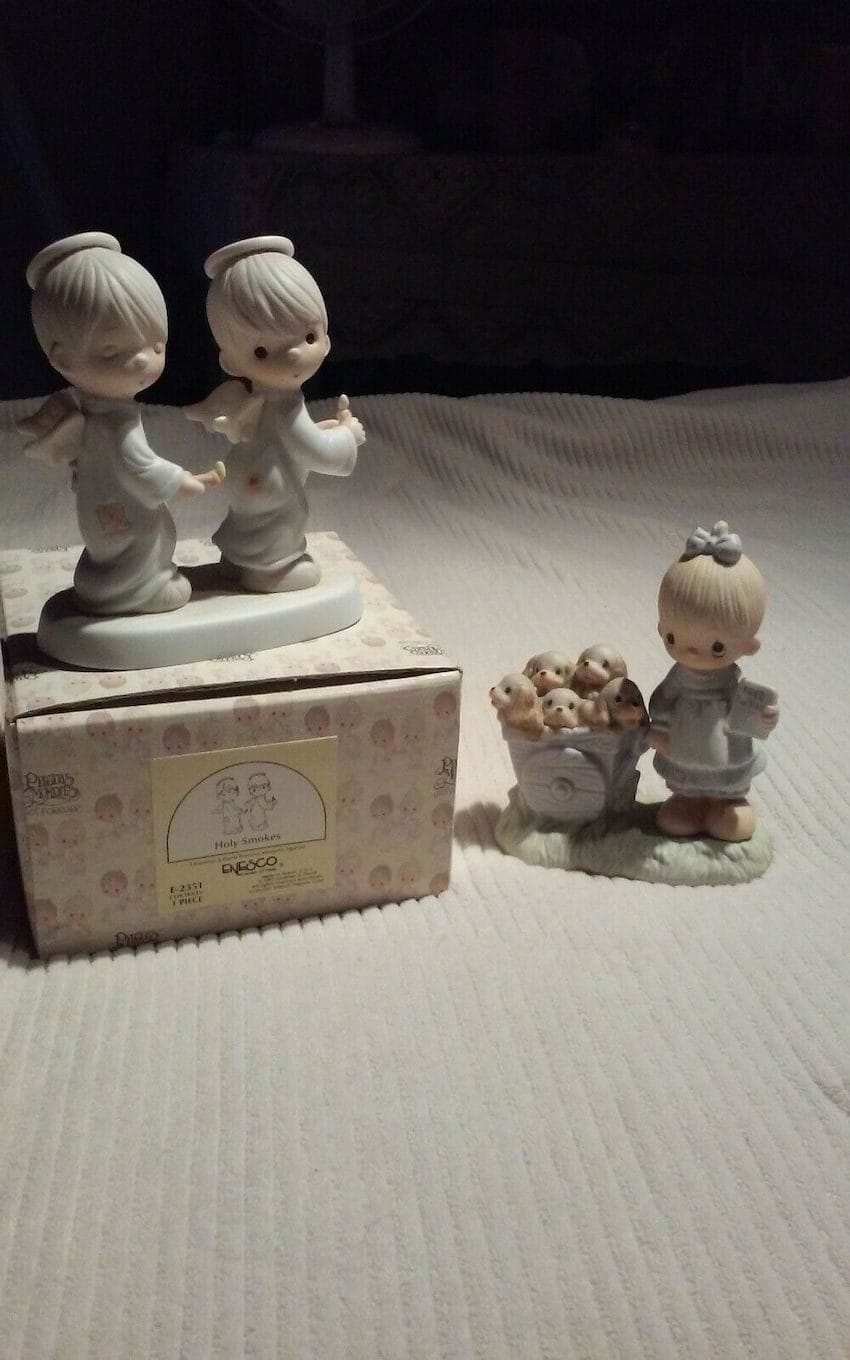 Paul said that the figurines are worth more if they are in excellent condition. Even a small crack or chip can reduce the price.

When figurines are older, they tend to sell for more. It’s always best to compare what is available on the online stores. 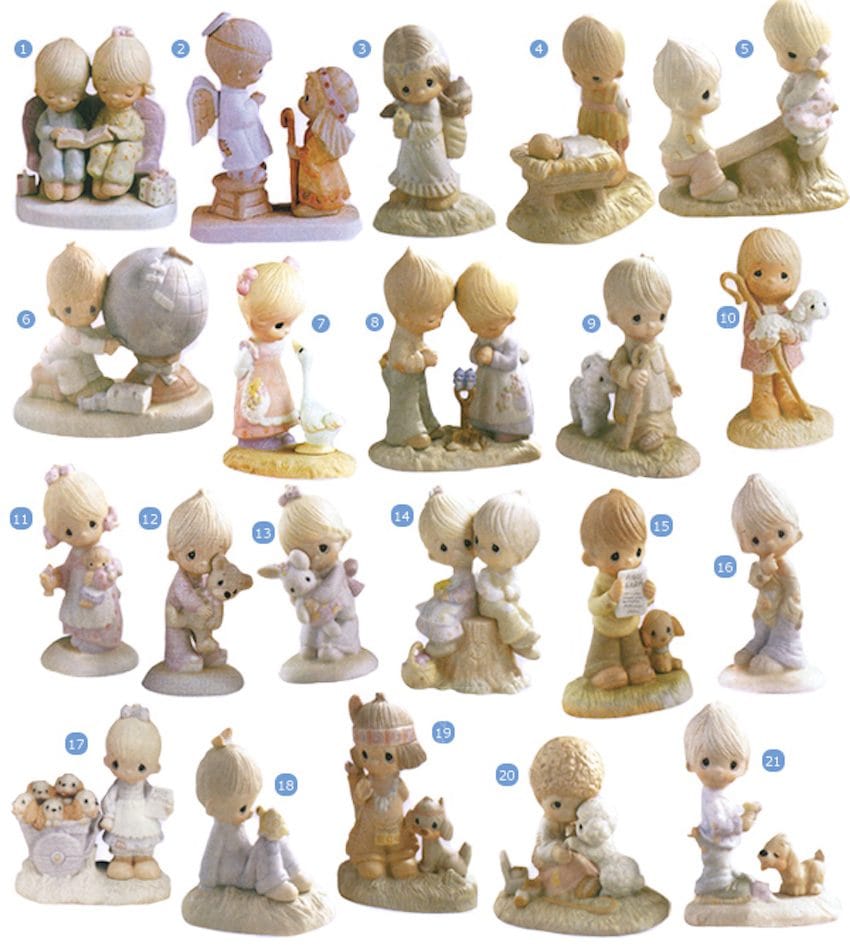 I guess it’s time to look around the house and see if you have any collecting dust. Perhaps you might like to try to sell them on eBay.

If you are going to sell them, dust the sculpture with a small makeup brush and wash it in mild soapy water if needed. Be careful you don’t get water inside or damage the figurine.

Even if you can’t find any lying around and would still like to make money, there are other options available.

Check your shelves! Your Precious Moments figurine could be worth thousands https://t.co/pbLcDjFI9v pic.twitter.com/g0Hl5IgJTt

Some old collectibles and vintage toys are worth a lot more than what they were originally. Furbies is a great example and this set is selling for $1000. 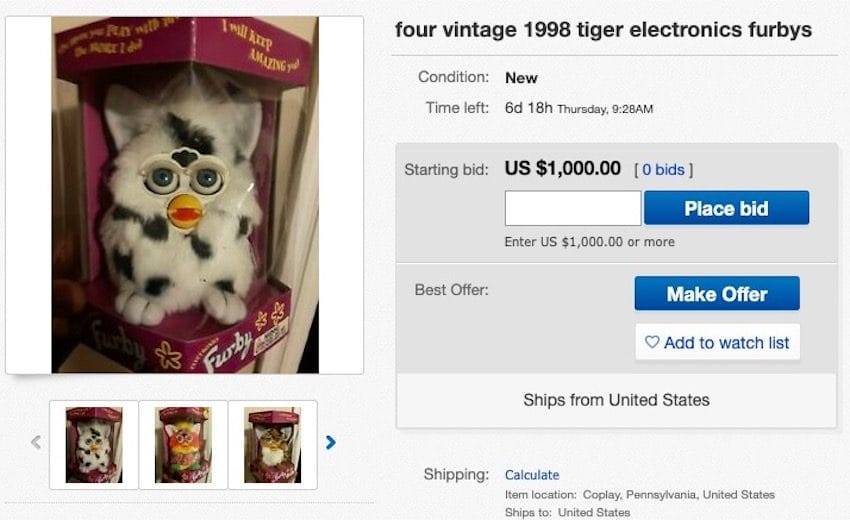 Do you happen to have an original Lite-Brite from 1967? It may be worth hundreds of dollars, even though the new version is still being sold in the store. 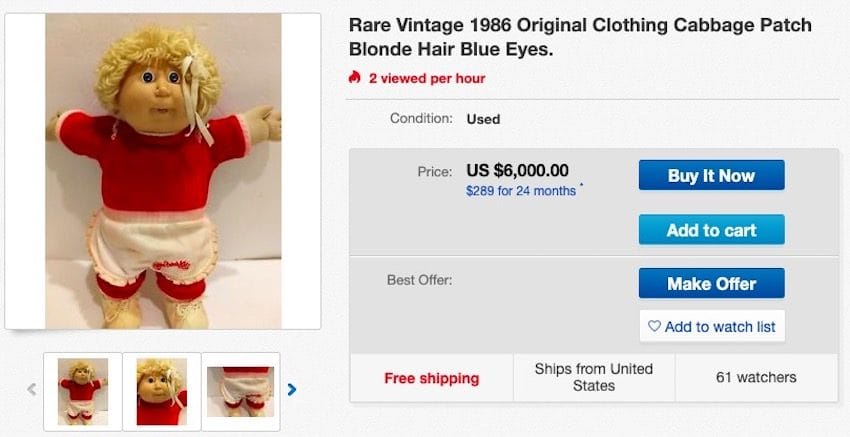 Then again, you could always try to sell your Beanie Babies!