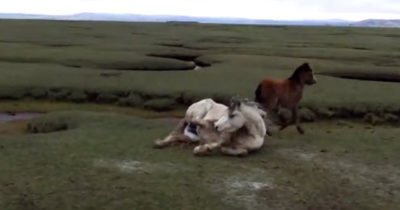 Animals seem to have a remarkable ability to adapt to any type of situation they find themselves in. As an example, horses who live in the area of the Louhor Estuary Marshland in Gower, South Wales, sometimes find themselves in a position where they have to deal with the rising and receding tide. They have been dealing with it for centuries, so they are often able to do so successfully.

From time to time, however, some animals find themselves in a rather precarious situation and it isn’t unusual for the RSPCA to step in and take care of the matter. It isn’t often necessary, but when it is, they may just save a life. That is what happened in this rather unusual instance, and it wasn’t the water that was causing the problem. In fact, it was something totally unexpected.

When the RSPCA saw that something was not quite right in the area, they decided to go into the Marshland and investigate it more closely. What they ended up finding was a young foal that was standing over his mother and watching as his mother struggled on the ground. It seems as if her rear hoof had somehow gotten entangled in her mane. As a result, she couldn’t maintain her balance and was struggling on the ground. It is difficult to tell how long she had been in that situation, but the men were willing to jump in and help. They cut her leg free has the foal continued to gallop around in the background.

After her hoof had been freed, she still had a difficulty standing up. Apparently, she had been in that position for quite some time and it took a while for the blood to get back into the area again. Fortunately, they were eventually off and able to move on to new adventures.