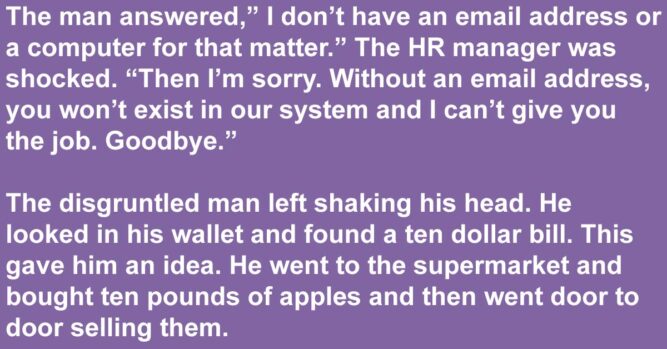 When we think about the advancements in technology that we have seen in recent years, we sometimes wonder how we would ever deal without them. After all, it’s rare to see somebody without a cell phone in their hand and when we don’t have a phone with us, we are likely in front of a computer or we have a tablet. We are constantly connected and if somebody is not connected, they are thought of as an outcast. Then again, some of the most successful people in history did not have a computer and that interesting fact is brought out clearly in the following humorous story.

A man applied for a job as a janitor at a large corporation and was invited for a job interview. The HR manager offered him the job and asked, “Can you please give me your email address so l can send you all the documents?”

The man answered,” I don’t have an email address or a computer for that matter.” The HR manager was shocked. “Then I’m sorry. Without an email address, you won’t exist in our system and I can’t give you the job. Goodbye.”

The disgruntled man left shaking his head. He looked in his wallet and found a ten dollar bill. This gave him an idea. He went to the supermarket and bought ten pounds of apples and then went door to door selling them. An hour later he had $20 which he used to buy more apples. He continued this process until late in the evening at the end of the day. He went home with $160 in his pocket.

The man continued his door-to-door sales every day and developed a feeling for what people want and need. This gave him more business ideas and eventually, he could afford a bike and then a delivery truck and then his own store. A few years later he had his own chain of supermarkets.

When he got older he started to think about retirement and leaving something behind for his family. He consulted a financial advisor to find out how he could leave an inheritance. When they were finished with all the financial planning the advisor asked the man for his email address so he could send him all the documents. The man answered, “I’ve never had a computer or an email address and I never will. Please send me everything by regular mail.”

The financial advisor was surprised and said, “You built your entire empire without a computer or an email address? Imagine where you’d be today if you had used those things.”

The man answered, “I’d be a janitor.”