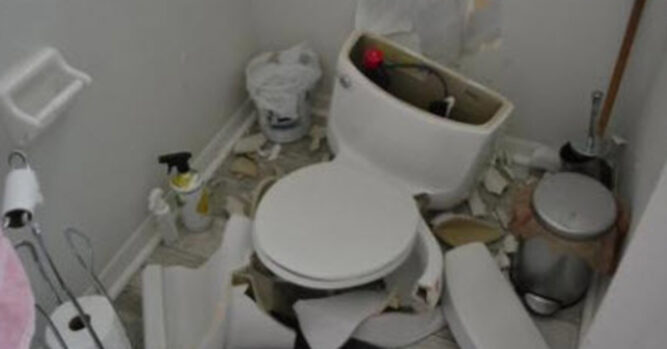 There are times when we hear about something happening that is so strange, we wonder if it could actually be true. Then again, in the back of our mind, we knew that it was a possibility all along. It happened recently and it has to do with something that is near and dear to all of us, a toilet. That’s right, plumbing history was made when a toilet actually blew up! Nobody was hurt, but the toilet is never going to be the same again.

We all are aware of the explosive nature of flatulence. It seems as if that gas built up inside of a septic tank in Florida, and the inevitable was about ready to happen. Of course, we all realize that Florida tends to have some of the most interesting news, and this is no exception. Lightning struck and ignited the gas inside of the septic tank, causing the toilet to explode inside of the home. It happened on August 4 and the couple was inside of the home in bed at the time. The toilet shattered into 1 million pieces, sending porcelain flying across the room, ‘airborne like a missile’.

MaryLou Ward had even more problems than the toilet blowing up, it ruined the entire plumbing system. That is when the homeowner and her husband called on A-1 Affordable Plumbing Inc. to take care of the issue and help them get back up and running again.

The images were shared on Facebook by the business with the caption ‘no more pooping while it’s storming outside’.

I’m sure that we all have the same question of why the toilet exploded. Jordan Hagadorn, owner of A-1 Affordable Plumbing Inc. told USA Today:

“Methane gas is gas caused by the number two. The natural gas is from crap, literally.”

The lid to the septic tank was only about an inch underground and the short distance allowed the lightning to travel into the tank, causing it to explode. The natural methane gas was ignited, traveling through the sewer pipes and ending up in the toilet inside of the bathroom.

Ward spoke to the local news station about the incident, saying that it was the loudest noise she had ever heard. She also said: “We got out of bed and came over here, and the toilet was laying on the floor.”

According to the Facebook post, the porcelain had gone into the wall when the toilet exploded. The force of the gas exploding also blew out part of the window.

Hagadorn was assessing the damage for about three hours and knows that it is going to be a big job to fix the toilet. He had never seen anything like it, neither had his father, who had been a plumber for 40 years. He says it is probably a ‘first in plumbing history’.

He also recommended that people stay off the toilet when it is thundering outside. Ward tends to agree. She said: “I’m not taking any showers and not going to the bathroom. Not when it’s thunderstorming and down here, that’s a lot.”

We’ve all heard about explosive gas happening when we are on the toilet. It looks like it has just taken on an entirely new meaning.