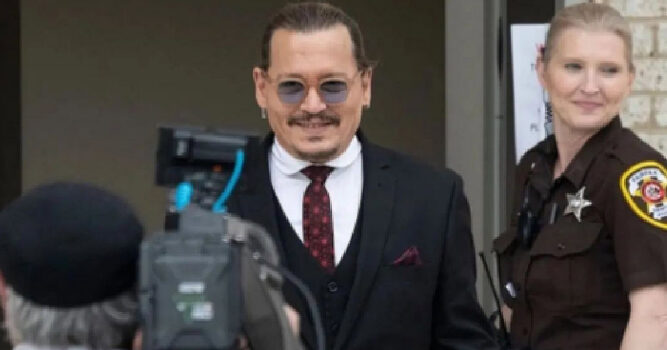 Weeks after the verdict that delighted millions of fans, Johnny Depp continues to live his best life.

Recently, the 58-year-old actor debuted his clean-shaven look when he took to the stage at the Helsinki Blues Festival on June 19 to perform with his good friend Jeff Beck.

Depp’s new hairstyle represents a change from the look he had during his 6-week-long defamation trial against his ex-wife Amber Heard.

The Pirates of the Caribbean star would usually walk out of the Virginia courthouse sporting his trademark goatee, mustache, and slicked-back ponytail.

Since he won his trial and was awarded over $10 million in damages by the jury, Depp has been touring Beck on his European tour, playing to packed stadiums filled to the brim with adoring fans. His pivot to focusing on playing music instead of acting was confirmed when early in the month, he and Beck announced they were collaborating on an album together.

With all of the life changes, it only seems fitting that Depp is taking up more of a rock & roll hairstyle. And when he made his appearance on stage in Finland over the weekend, the star appeared to have shaven off his beard and mustache while letting his hair down.

“We stand with Johnny Depp and his new beginning,” one fan wrote, while another commented: “Looking beautiful, healthy and at peace.”

Fans overall have been very supportive of his new look.

However, one fan was a bit more critical, making it clear that while she liked the fact he ditched the beard, she wasn’t so keen on his auburn hair. “Clean-shaven looks great. Next ditch the orange hair,” they tweeted.

Meanwhile, many of his fans continued to pour praise and voice their undying love for the actor, who had only recently resurrected his career and reputation from the brink of destruction.

“You’re gorgeous Johnny Depp. I love you so much, I love you with all my heart,” the super-fan wrote.

You're gorgeous Johnny Depp. I love you so much, I love you with all my heart… ❤️‍🔥❤️‍🔥❤️‍🔥#JohnnyDepp pic.twitter.com/FIFqPxARDO

Also, you can watch more of Johnny Depp performing at the Helsinki Blues Festival in the video below.