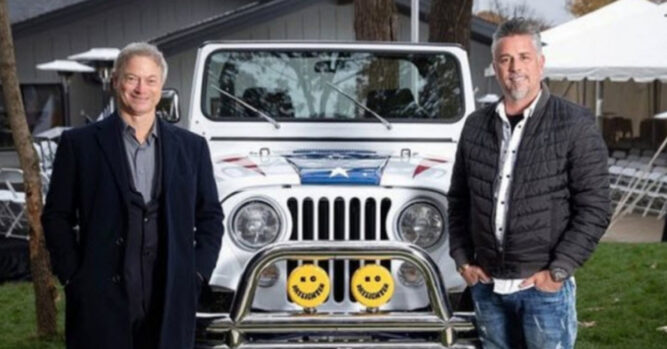 Gary Sinise has done a lot to help veterans in the United States as well as their families. More than likely, you know him as Lieut. Dan from the movie, Forrest Gump and he also played in Apollo 13. It was during the time that he was playing on Forrest Gump, however, that he was inspired to begin helping veterans. Now he has done so in a way that most people find both inspirational and amazing.

Recently, Gary raised $1.3 million for first responders and veterans but he did so in a rather unusual way. He donated in 1981 Jeep CJ7 to the Barrett-Jackson auction in Scottsdale, Arizona. All of the proceeds from the sale of the vehicle would go to first responders and military members. It might not seem like much at first but this is no ordinary vehicle. It is one-of-a-kind that was customized by Richard Rawling’s Gas Monkey Garage with a patriotic theme.

The monkeys are pumped that y'all get to see the newest @FastNLoudTV build go across the block this Friday at @Barrett_Jackson. 100% of the proceeds will go to the @GarySiniseFound and you can a bid online! Head to https://t.co/6n5GqEVyHM for more info! pic.twitter.com/jMiKJip3EU

The car auction raised $200,000 for the customized Jeep. Sunbelt Rentals, however, donated an extra $1 million to the cause. This is where it gets interesting.

The buyer didn’t keep the vehicle but he sent it back to auction, selling it for $100,000. That makes a total of $1.3 million for a single vehicle! Sinise had a private dinner with him in LA and he was able to visit the Gary Sinise Foundation.

Gary was thrilled about the willingness of the donators to step forward. “My first car auction, it’s going to be hard to top that,” Sinise told The Arizona Republic. “There were a lot of veterans out there in the audience so I got to acknowledge them and say thank you.”

This 1981 @Jeep CJ7 is a custom @GasMonkeyGarage build completed for a future episode of Discovery Channel’s @FastNLoudTV. With award-winning actor @GarySinise on the block, it will be auctioned with 100% of the hammer price going to the @GarySiniseFoundhttps://t.co/OSbuW2LH6L pic.twitter.com/IZVXJcvfP1

Sinise is no newcomer when it comes to helping active military families and veterans. He has been visiting hospitals since starring in Forrest Gump and created the Gary Sinise Foundation in 2011.

“When our veterans came home from the Vietnam War, they were not treated well and had to disappear into the shadows,” Sinise said. “When we started deploying to Iraq and Afghanistan, I wanted to do my part to make sure the men and women doing their part were appreciated.”

He is also the author of a book, ‘Grateful American’ that was released February 12.