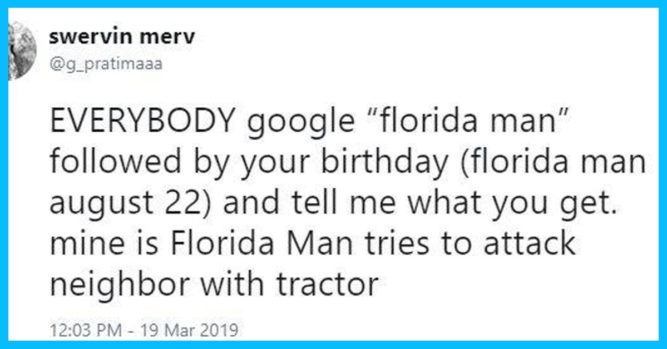 It’s strange, but one thing that tends to make us all feel better is looking at the issues that other people have had. It is especially true recently of individuals in Florida, because the arrest records are publicly available and we have plenty of ‘Florida man’ stories to pass around.

Every time a new Florida headline hits the page, it seems as if there is a new opportunity to create A Marvel universe around it. It includes the characters, the motivations and all of the impossible things that only our imagination could ever come up with. Twitter accounts have been dedicated to digging up the weirdest and darkest stories coming out of Florida, and the state has plenty of them.

In keeping with the appreciation, the Internet seems to have with Florida headlines, one Twitter user started to challenge that has people googling their birthday along with “Florida Man” and then posting the results.

EVERYBODY google “florida man” followed by your birthday (florida man august 22) and tell me what you get. mine is Florida Man tries to attack neighbor with tractor

It wasn’t long before the twitter thread filled up because everyone seems to enjoy doing this.

Where do I collect my prize? #floridaman pic.twitter.com/kkxyQeTPns

we got the same birthday!
there's also this gem pic.twitter.com/I0mwfsGIMF

EVERYBODY google “florida man” followed by your birthday (florida man august 22) and tell me what you get. mine is Florida Man tries to attack neighbor with tractor

Not all of them are funny, as some are a little bit sad but they all tell an interesting story.

I gotchu. This happened on Aug 21st as well pic.twitter.com/UHMeqxbfM2

Baha ? what is this pic.twitter.com/Pb1BiVjJ46

I mean, I had to screengrab the results because I couldn’t choose just one. pic.twitter.com/X0vXsx6KdZ

There were also some wholesome responses out there.

?”A #Florida reptile store owner made notorious after a man died during a 2012 insect eating contest at the business is behind bars after he smacked employees with a bearded dragon lizard and even put it in his mouth during a bizarre attack.”#FloridaManhttps://t.co/X3ugzO5nuK pic.twitter.com/WktoKmxKip

This is one you have to try for yourself.