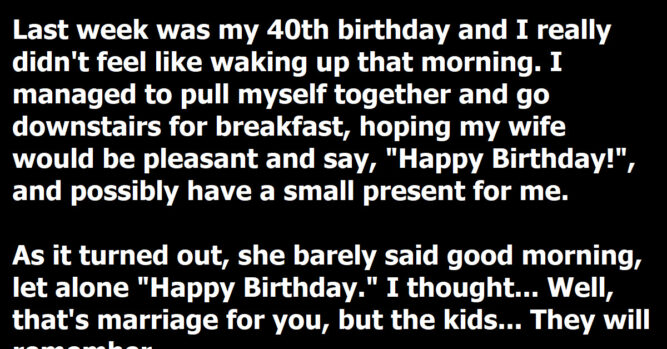 What is the funniest part of any joke? Typically, it begins with some type of story that grabs your attention and pulls you along as it works its way toward the end. You may have a laugh here or there while the joke is being told but it isn’t until you get to the punch line that you actually get a good laugh. If the punchline is lackluster, it will make the joke seen like it was a waste of time. On the other hand, if there is a good twist to the story that really surprises you in a funny way, you will get a good laugh out of it. This is a story that somebody told from their own perspective as being true. I’m not saying that it’s true or not, but I am saying it is hilarious.

“Last week was my 40th birthday and I really didn’t feel like waking up that morning. I managed to pull myself together and go downstairs for breakfast, hoping my wife would be pleasant and say, “Happy Birthday!”, and possibly have a small present for me.

As it turned out, she barely said good morning, let alone “Happy Birthday.” I thought… Well, that’s marriage for you, but the kids… They will remember.

My kids came trampling down the stairs to breakfast, ate their breakfast, and didn’t say a word to me. So when I made it out of the house and started for work, I felt pretty dumpy and despondent.

As I walked into my office, my secretary Joanne said, “Good Morning Boss, and by the way Happy Birthday!”

It felt a bit better knowing that at least someone remembered.

I worked in a zombie-like fashion until about one o’clock, when Joanne knocked on my door and said, “You know, it’s such a beautiful day outside, and it’s your Birthday, why don’t we go out for lunch, just you and me.”

We went to lunch but not where we’d normally go. Instead, she took me to a quiet bistro with a private table. We had a couple of mixed drinks and I enjoyed the meal tremendously.

I replied with “I suppose not. What do you have in mind?” She said, “Let’s go to my apartment, it’s just around the corner.”

After arriving at her apartment, Joanne turned to me and said, “Boss if you don’t mind, I’m going to step into the bedroom for just a moment. I’ll be right back.”

She went into the bedroom and, after a couple of minutes, she came out carrying a huge birthday cake…

Followed by my wife, my kids, and dozens of my friends, and co-workers, all singing “Happy Birthday”.

And I just sat there… On the couch… Naked.