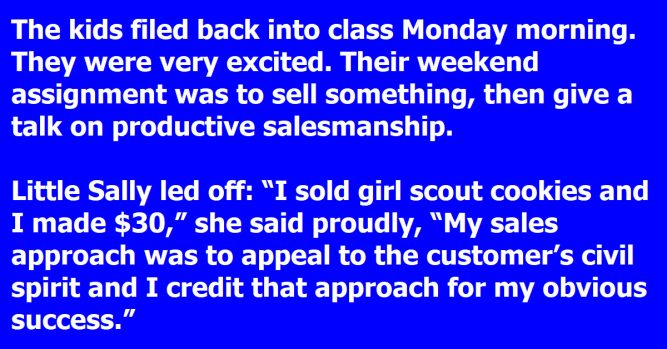 Although the primary responsibility for teaching children falls on the parents, there are many times when it is also going to involve the school system. Even if we try to teach our children everything that we possibly can at home, the lessons that they learned from a good teacher is going to stick with them for the rest of their lives. Every once in a while, however, the student teaches something to the teacher, and that is exactly what happens in this hilarious joke.

The kids filed back into class Monday morning. They were very excited. Their weekend assignment was to sell something, then give a talk on productive salesmanship.

Little Sally led off: “I sold girl scout cookies and I made $30,” she said proudly, “My sales approach was to appeal to the customer’s civil spirit and I credit that approach for my obvious success.”

Little Jenny was next:

“I sold magazines,” she said, “I made $45 and I explained to everyone that magazines would keep them up on current events.”

Eventually, it was Little Johnny’s turn. The teacher held her breath.

Little Johnny walked to the front of the classroom and dumped a box full of cash on the teacher’s desk. “I made $2,467,” he said.

“Toothbrushes!” echoed the teacher, “How could you possibly sell enough toothbrushes to make that much money?”

“I found the busiest corner in town,” said Little Johnny, “I set up a Dip and Chip stand and gave everybody who walked by a free sample.”

They all said the same thing, “Hey, this tastes like dog crap!”

Then I would say, “It is dog crap. Wanna buy a toothbrush?”

“I used the government’s approach of giving you something crappy for free, and then making you pay to get the taste out of your mouth.”