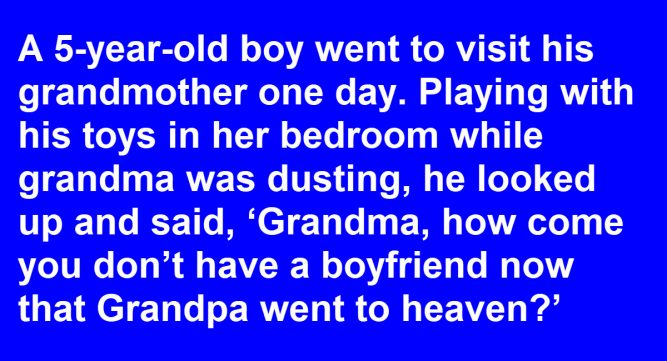 Not so long ago, women would often outlive their husbands (who lived much tougher lives than most men today). When this took place, a woman would become a widow, and folks in her community would often refer to them as widows when speaking their names to others. Back then, it was highly unusual for widowed women to date, and often dating and remarrying tended to raise a few eyebrows. I suppose they didn’t really believe in the whole “Til death do us part” clause of the agreement. Nevertheless, times have changed, and now plenty of grandmas are dating well into their golden years. However, in this fictional story, one grandma explains her “dating life” to her grandson, who totally gets things all mixed up!

A 5-year-old boy went to visit his grandmother one day. Playing with his toys in her bedroom while grandma was dusting, he looked up and said, ‘Grandma, how come you don’t have a boyfriend now that Grandpa went to heaven?’

Grandma replied, ‘Honey, my TV is my boyfriend. I can sit in my bedroom and watch it all day long. The religious programs make me feel good and the comedies make me laugh. I’m happy with my TV as my boyfriend.’

Grandma turned on the TV, and the reception was terrible. She started adjusting the knobs, trying to get the picture in focus. Frustrated, she started hitting the backside of the TV hoping to fix the problem.

The little boy heard the doorbell ring, so he hurried to open the door, and there stood Grandma’s minister. The minister said, ‘Hello son, is your Grandma home?’

The little boy replied, ‘Yeah, she’s in the bedroom bangin’ her boyfriend.’