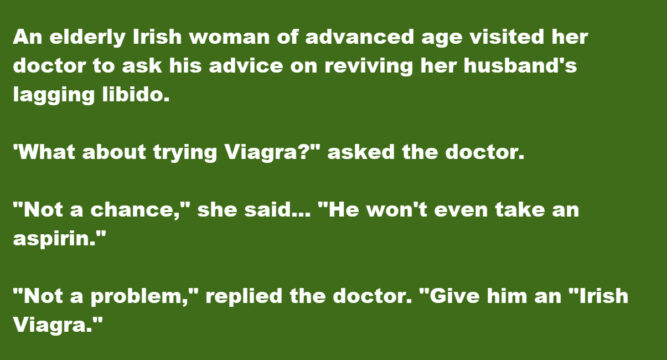 One issue many marriages face is a lack of excitement. This is to be expected after raising kids and dealing with the grind of everyday life. Times may not always feel as exciting as those early courtship days. But one thing married couples tend to have after years of marriage is a sort of comfort, they know their partners inside and out and feel a special connection that goes much deeper than it did when they were dating. At least, that’s the ideal, right? The married woman in this joke visits her doctor to see if he can help her bring back some passion into the couple’s private life. Little did she know she would get a lot more than she bargained for!

An elderly Irish woman of advanced age visited her doctor to ask his advice on reviving her husband’s lagging libido.

‘What about trying Viagra?” asked the doctor.

“Not a problem,” replied the doctor. “Give him an “Irish Viagra.”

“What’s this Irish Viagra?” she asked.

“You drop the Viagra tablet into his coffee. He won’t even taste it. Give it a try and call me in a week to let me know how things went.”

A week later she called the doctor, who asked her about the results.

“Really? What happened?” asked the doctor.

“Well, I did as you advised and slipped it in his coffee and the effect was immediate.

He jumped straight up, with a twinkle in his eye! With one swoop of his arm, he sent cups and tablecloth flying, then ripped me clothes to tatters and took me then and there on the tabletop! T’was a nightmare, I tell you, an absolute nightmare!”

“Why so terrible?” asked the doctor, “Do you mean it wasn’t good?”

“It was the best I’ve had in 25 years! But sure as I’m sittin’ here, I’ll never be able to show me face in Starbucks again!”

If you enjoyed this joke please share it with your friends and family.