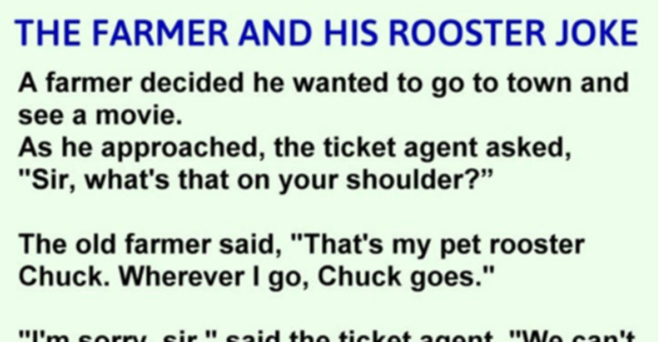 As we get older, we collect some rather unusual memories. Some may look back at their lives and claim that strange things happened to them all the time. In fact, there a lot of folks who would tell you that they’ve “seen it all.” However, every once in a while there are going to be those things that come up that catch us by surprise. These unpredictable events make life more interesting. The two old ladies in this story experience such an event while visiting the movies. Just wait until you hear what happened.

A farmer decided he wanted to go to town and see a movie.

The ticket agent asked, sir, what’s that on your shoulder?”

The old farmer went around the corner and stuffed chuck down his overalls.

Then he returned to the booth, bought a ticket, and entered the theatre. He sat down next to two old widows named Mildred and Marge.

The movie started and the rooster began to squirm. The old farmer unbuttoned his fly so chuck could stick his head out and watch the movie.

“What makes you think so?” asked Marge?

“He undid his pants and he has his thing out”, whispered Mildred.

What did you think? Let us know in the comments section and be sure to share this joke with your friends and family.