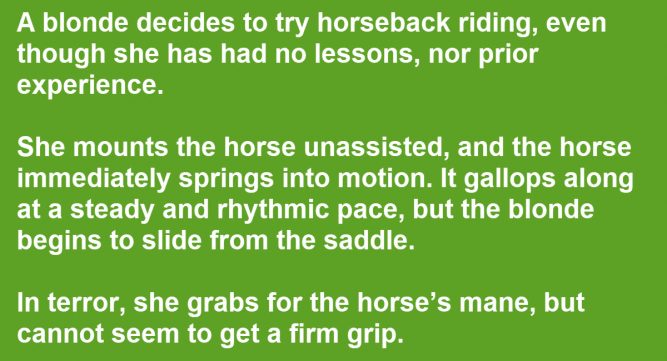 Horses are some of the most beautiful creatures in the world. And while many people may think of them as affable, friendly creatures, perhaps growing up watching shows like Mr. Ed, horses can be mean when they want to be. These creatures can and will bite and kick, but they can also throw you into next Tuesday if you don’t know what you’re doing in the saddle. This is why riding a horse for the first time is something one should do under the instruction of a professional teacher. However, in this fictional joke, one blonde girl decides to give it a try on her own, and the results were not pretty.

A blonde decides to try horseback riding, even though she has had no lessons, nor prior experience.

She mounts the horse unassisted, and the horse immediately springs into motion. It gallops along at a steady and rhythmic pace, but the blonde begins to slide from the saddle.

In terror, she grabs for the horse’s mane, but cannot seem to get a firm grip. She tries to throw her arms around the horse’s neck, but she slides down the horse’s side anyway. The horse gallops along, seemingly impervious to its slipping rider.

Finally, giving up her frail grip, the blonde attempts to leap away from the horse and throw herself to safety.

Unfortunately, her foot has become entangled in the stirrup, she is now at the mercy of the horse’s pounding hooves as her head is struck against the ground over and over.

As her head is battered against the ground, she is mere moments away from unconsciousness when to her great fortune… Frank, the Walmart greeter, sees her dilemma and unplugs the horse.

And you thought all they did was say Hello.