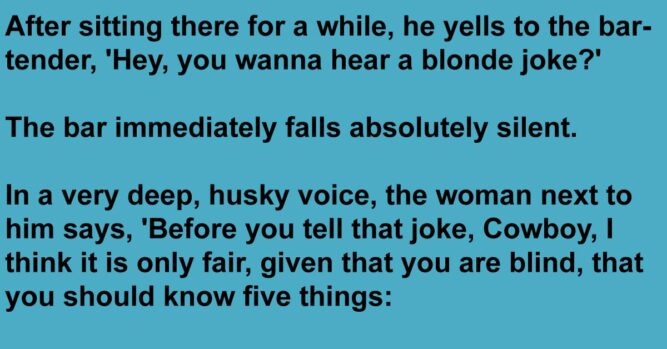 I think there are many people who we would think of as being wise beyond their years. Sometimes we may hear about children who are wise and we even use the expression: “out of the mouths of babes.” Along with that expression, we may think about people who tend to be more wise than others, such as old farmers, cowboys, and senior citizens. These are people who live their lives in many ways, doing so in a way that allowed them to build wisdom naturally. Yes, wisdom is a great thing and it comes through loud and clear in the following joke.

An old blind cowboy wanders into an all-girl biker bar by mistake.

He finds his way to a barstool and orders a shot of Jack Daniels.

After sitting there for a while, he yells to the bartender, ‘Hey, you wanna hear a blonde joke?’

In a very deep, husky voice, the woman next to him says, ‘Before you tell that joke, Cowboy, I think it is only fair, given that you are blind, that you should know five things:

1. The bartender is a blonde girl with a baseball bat.

2. The bouncer is a blonde girl with a ‘Billy-Club’.

4. The woman sitting next to me is blonde and a professional weight lifter.

5. The lady to your right is blonde and a professional wrestler.

‘Now, think about it seriously, Cowboy. Do you still wanna tell that blonde joke?’

The blind cowboy thinks for a second, shakes his head, and mutters,