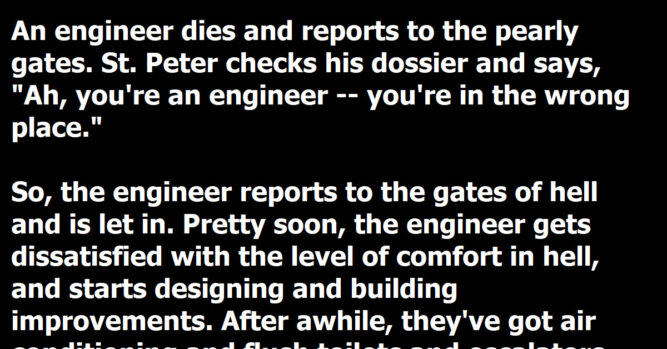 Jokes are something that I think everybody can appreciate. For some people, a joke is something that they are told at a party or perhaps by the person who regularly tells jokes at work. On the other hand, we may also be the type of person who tends to pass jokes along because we appreciate making other people laugh. Although there are many different types of jokes, the ones that tend to work best are those that are short, sweet and to the point. They also need to have a twist at the end that will leave you laughing. This joke has everything necessary to be funny, which is why we laughed so hard when we heard it.

An engineer dies and reports to the pearly gates. St. Peter checks his dossier and says, “Ah, you’re an engineer — you’re in the wrong place.”

So, the engineer reports to the gates of hell and is let in. Pretty soon, the engineer gets dissatisfied with the level of comfort in hell, and starts designing and building improvements. After awhile, they’ve got air conditioning and flush toilets and escalators, and the engineer is a pretty popular guy.

One day, God calls Satan up on the telephone and says with a sneer, “So, how’s it going down there in hell?”

Satan replies, “Hey, things are going great. We’ve got air conditioning and flush toilets and escalators, and there’s no telling what this engineer is going to come up with next.”

God replies, “What??? You’ve got an engineer? That’s a mistake — he should never have gotten down there; send him up here.”

Satan says, “No way. I like having an engineer on the staff, and I’m keeping him.”

Satan laughs uproariously and answers, “Yeah, right. And just where are YOU going to get a lawyer?”