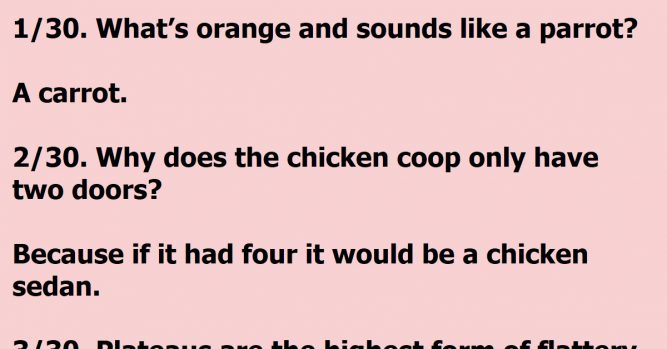 There is something that all of us expect when somebody tells us a joke, and that is that we want to laugh when it is over. We realize that not every joke is going to be the same and some of them are just going to cause a little chuckle while others are going to result in a full belly laugh. Perhaps some of the best-known jokes, however, fall straight in the middle and they are sometimes known as ‘dad jokes’. Most people would say that dad jokes aren’t funny but as you look down through the following 30 examples, you can’t help but admit that they are hilarious.

2/30. Why does the chicken coop only have two doors?

Because if it had four it would be a chicken sedan.

3/30. Plateaus are the highest form of flattery.

4/30. A Mexican magician says that he’ll disappear on the count of three.

He disappeared without a tres.

5/30. People say they’re worried that my friend is doing his disappearing act too much.

But I know it’s just a stage he’s going through.

6/30. A game warden catches an unlicensed fisherman in the act. “You’re going to pay a big fine for all those fish in your bucket” But, officer, I didn’t catch these — they are my pet fish and I just bring them here to swim. When they’re done they jump back into the bucket. “Oh really? This I’ve got to see. If you can prove it, I’ll let you go.” The fisherman empties the bucket into the lake and waits patiently. A few minutes go by and nothing happens. Game warden: So where are the fish? Fisherman: What fish?

9/30. What is Beethoven’s favorite fruit?

He has really small legs

11/30. Two parrots are sitting on a perch. One turns to the other and asks “Do you smell fish?

12/30. Have you ever tried to eat a clock? Its very time-consuming.

I went back for seconds.

A: One is very heavy, and the other is a little lighter.

15/30. My friend had a baby recently. The doctor was weighing the baby when she turned to my friend and said, “I’ve seen ugly babies before, but not on this scale!

16/30. What do you call a sleepwalking nun? A roamin’ catholic

18/30. Two cows are grazing in a pasture. One cow turns to the other and says “What do you think about this mad cow disease?” The other cow responds: “Doesn’t bother me. I’m a helicopter.

19/30. Two cannibals are eating a clown. One turns to the the other and asks, “Does this taste funny to you?

Because it was stuck to the chickens foot.

23/30. Hello everyone, welcome back to Plastic Surgery Addicts Anonymous. I see a lot of new faces here tonight, and I gotta say I’m pretty disappointed.

24/30. So, a guy walks into a mexican restaurant and takes a seat. Before he gets to order a his food, the bowl of tortilla chips in front of him says “Hey, you’re a handsome fellow.”

The man tries to ignore the chips and orders a soda. The chips says “Ooooh that drink is delicious. Great choice. You’re a very smart man.”

Starting to freak out, the guy says to the waiter “Hey what the heck, this bowl of chips keeps saying nice things to me!” Waiter says “Don’t worry about it, the tortilla chips are complimentary.

25/30. Two atoms are walking down the street together. The first atom turns and says, “Hey, you just stole an electron from me!”

“Are you sure?” asks the second atom.

To which the first atom replies, “Yeah, I’m positive!

26/30. A blind guy walks into a store and starts swinging his seeing eye dog around his head. An employee comes over and nervously asks if he can help. The blind guy replies “No thanks. I’m just looking around.

Two chairs and half a fish.

You look for the fresh prints.

30. What did the right eye say to the left eye? “Between you and me, something smells.