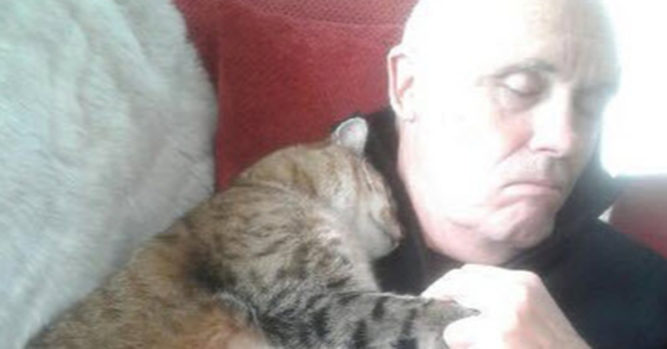 I’m sure that you have probably heard that laughter is the best medicine but it seems as if a snuggle may be a close second. That is the truth according to a man named Andrew Falloon, whose father was just out of surgery and a surprise guest happened to wander into his room. His wife had gone out and the door was open slightly. The man was recovering and was sound asleep and a cat was resting on the bed next to him. The thing is, the man doesn’t own a cat!

Most of us who have a cat in our lives would appreciate how nice it is to have them snuggle up with us every once in a while. It seems as if it isn’t only something that helps us to feel better emotionally, it may also have some therapeutic benefit for us physically as well. This man was fresh out of surgery and a cat wandered in to make him feel a little bit better. It is almost as if the feline realized he needed a snuggle that day.

My Dad is recovering from an operation. Mum went out and left a door slightly ajar.

My parents do not have a cat. pic.twitter.com/uuQdBMlKQY

They still don’t know where the cat came from but they are glad he was there.

My Dad is recovering from an operation. Mum went out and left a door slightly ajar.

My parents do not have a cat. pic.twitter.com/uuQdBMlKQY

Of course, Twitter is the best place to post anything about random cat snuggles. The story has gone viral.

So sweet. That cat now owns your parents. ?

"You have the right to be comforted by a cat. If you do not have a cat, one will be provided for you, mysteriously and out of the blue, at no charge."

Some of the users have even started sharing their own pictures.

That's how I ended up with my permanent 'lodger' pic.twitter.com/qGw1lcljJ5

Adopted my Spicey as a tiny kitten from the local shelter.
Now a very loving 11-year-old big cat.
He just climbed up in my lap again. pic.twitter.com/0hdNwGOC67

Andrew’s father is not about to start blogging about cats anytime soon. His father doesn’t necessarily love cats but he is coming around.