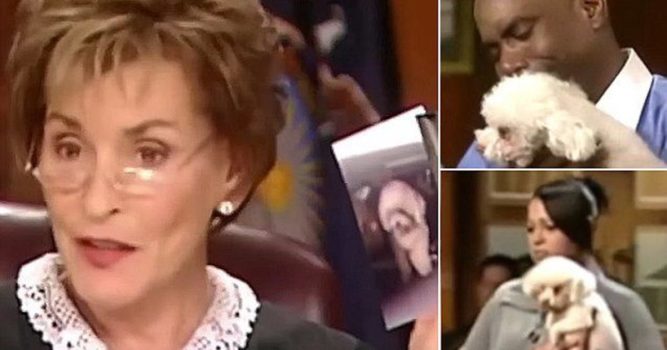 How far would you go to take care of your dog? For most families, a dog is more than just another person taking up space in the home, they are a full-fledged member of the family. In fact, they are often loved even more than the human members of the family and they certainly show a lot of loyalty to us, through thick and thin. Perhaps that is why this courtroom case on Judge Judy was such an impressive moment that it went viral.

A man, who was obviously heartbroken, had filed charges against the woman and they ended up standing in front of Judge Judy. His claim was that her dog was actually his dog and that the dog had been stolen from him. The small white fluffy pooch had allegedly been purchased outside of a shopping center for only $50. The man claimed that ‘Baby Boy’ was his and he even cried, “This is like my child!” The defendant went on to show Judge Judy a lot of paperwork and photos to prove that Baby Boy was actually hers.

Judy knew that something wasn’t quite right but she couldn’t figure it out. That is when she did something that was not only bold, it was practically inspired! She decided there was one way to determine who the true owner was and that was to allow the dog to do it for himself. She told the defendant to bring Baby Boy into the courtroom and put him down on the floor so that they could see who he would run to first.

Everybody was quiet when Baby Boy came into the courtroom. Finally, the signal was given for the dog to be left loose and before you know it, the most heartwarming moment that the Internet has ever seen was born: