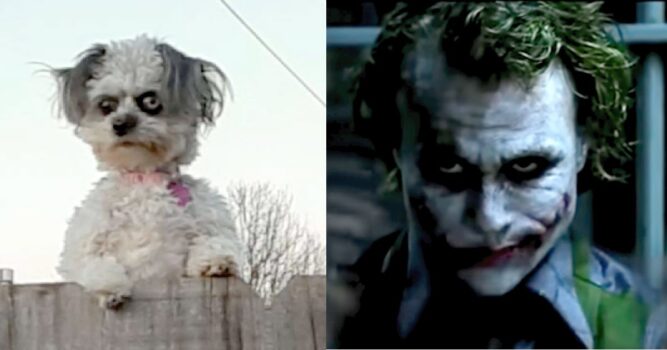 I still remember how many Batman fans were very skeptical upon learning that Heath Ledger was playing the Joker in the 2008 Batman sequel titled “The Dark Knight.” Most fans regarded Ledger at the time as a heartthrob actor, and many doubted his ability to top Jack Nickelson’s portrayal in the 1989 Batman film, starring Michael Keaton as Batman. But, before The Dark Knight, Ledger had earned critical acclaim in the controversial 2005 film “Brokeback Mountain,” proven he was a true acting heavyweight.

And soon, he more than proved it again as Ledger delivered the performance of his career that still has fans buzzing. And today, everywhere you look, you can tribute art dedicated to Heath Ledger’s iconic character. There have also been a few pretty good impersonations, such as the one performed by a guy attending a Halloween party in 2019. This short 19-second video has racked up over 12 million views on YouTube alone!

It’s hard to imagine anyone beating that impression, but according to many folks, it’s already been topped — by a dog.

Meet Junebug, a curious little pup with an oversized personality. However, for many of her neighbors, she’s just a little too intense for their tastes. 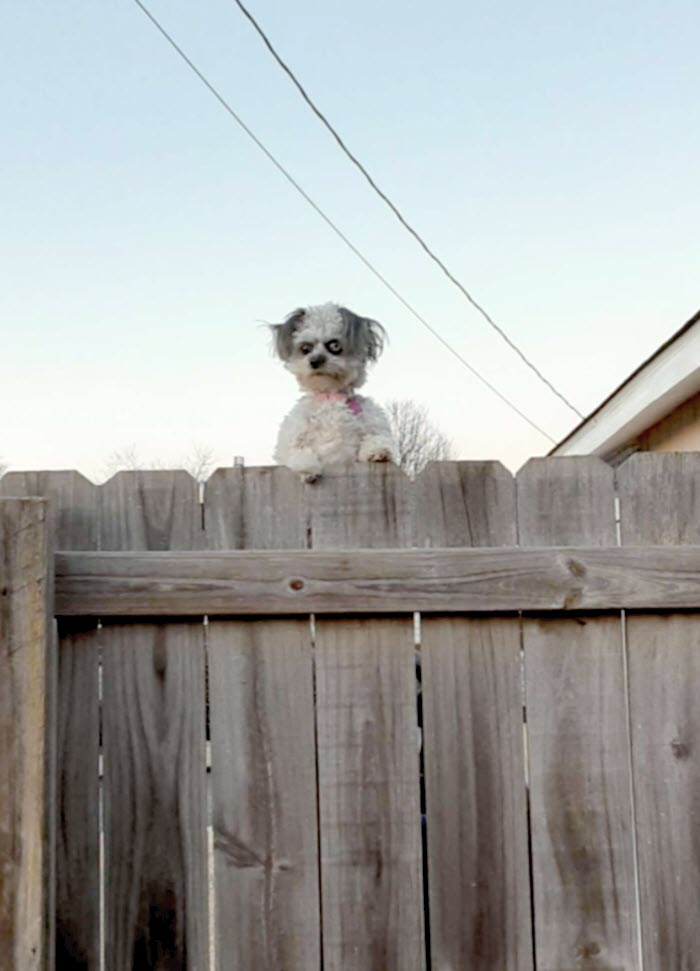 The above photo of the sweet 4-pound pup has gone viral over recent days. It shows Junebug just peeking over the top of a tall fence, fixing what folks are calling the “joker death stare” unto passersby.

One Twitter user admitted that they had “never been more scared of a dog.”

Here, have a closer look. 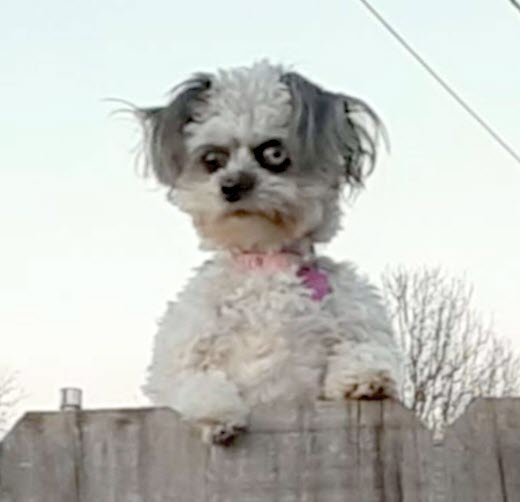 A lot of folks have compared Junebug to Micheal Keaton’s Beetlejuice character, but for most, Ledger “Joker” instantly pops into their minds. Some have even compared her to Pennywise from “it.”

But according to her owner, there’s nothing about Junebug (other than her appearance) folks need to be scared of. The Dodo managed to find Junebug’s parent, Tim K., who shared more about his “scary” pup and Junebug’s infamous viral pic. As you would expect, Junebug’s personality is nothing like her appearance. Tim says she’s a perfect angel.

However, to be fair, no one can deny Junebug does come off as a tad bit disgruntled, even though she’s an absolute sweetheart.

Now, you might ask yourself, how is such a tiny pup able to stare over such a tall fence in the first place? Well, time provides a cute explanation for that. 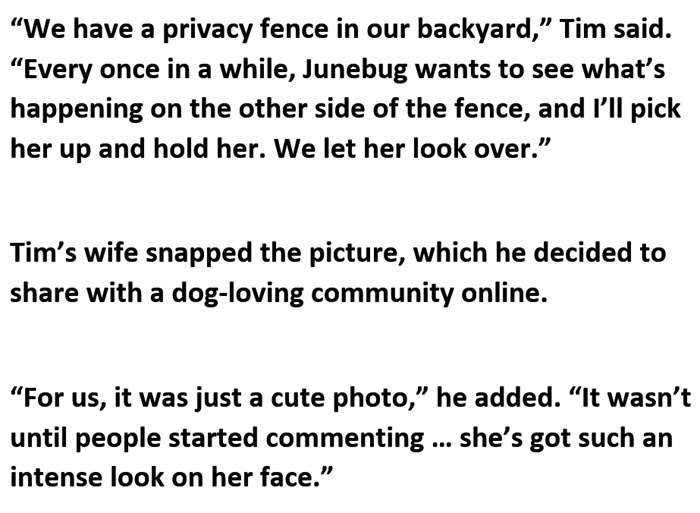 But that’s just sweet little Junebug. She can’t help it. 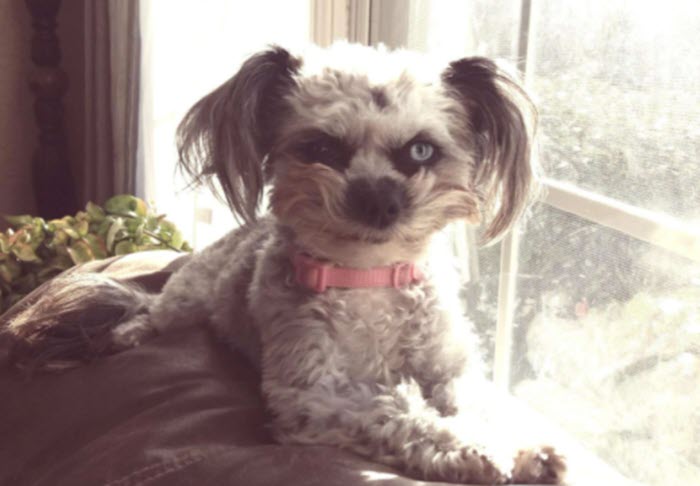 The last thing Tim and his wife ever expected was for Junebugs photo to go viral the way it had or for folks to see her as scary. 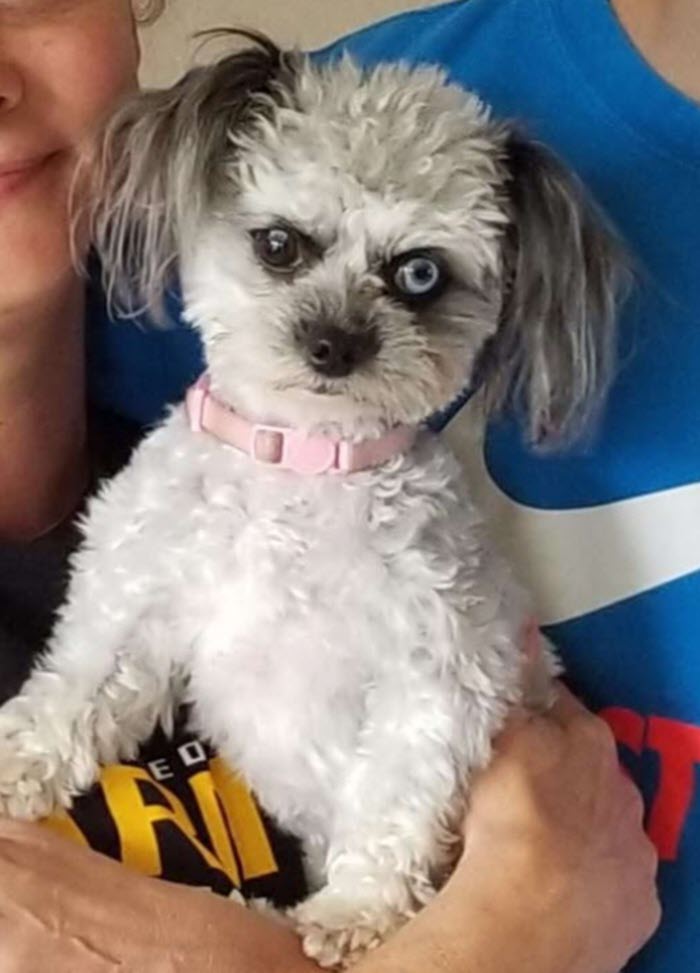 But, they know their pup and are more than happy to share the truth about the real Junebug.

What are your thoughts on Junebug’s appearance? Also, please be sure to pass this funny story along to your friends and family.