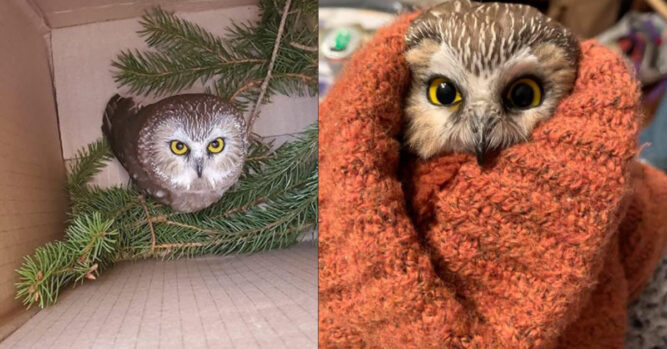 Since 1933, the Rockefeller Center Christmas tree has become an American tradition and one of the most well-known Christmas trees on the planet. These massive trees usually range between 69 and 100 feet tall. Since 1997, NBC would air a “Christmas in Rockefeller Center” special every Wednesday after Thanksgiving. In the program, they would conclude each broadcast with a ceremonial lighting of the tree. An estimated 125 million people visit New York City each year to see the legendary tree. However, with the current COVID-19 pandemic, officials believe there won’t be anywhere near that many visitors coming out this year.

The 2020 Rockafeller tree is a 75-foot-tall Norway spruce driven down from Oneota, New York, on Monday. However, workers soon discovered the tree hid a tiny hitchhiker — a Saw-whet owl. After finding the adorable little stowaway, workers safely removed the little bird from the tree and put it in a box. They then contacted the Ravensbeard Wildlife Center, located in Saugerties, New York. According to the organization, the Saw-whet Owl is one of the smallest owls in the northeast.

We are all the Rockefella Christmas Tree Owl. 😑 https://t.co/O6xo7yyS1V

Many have argued that the owl should be returned to Oneonta. But, the center says that Saw-Whet owls are highly adaptive and can find new mates each year. They are also very good at finding new shelter.

While he’s a little bummed his big city vacation is over, we're happy to report Rockefeller the Owl has been given a clean bill of health thanks to the efforts of Ravensbeard Wildlife Center and our staff! ⁣ pic.twitter.com/rN4uG0Iq5X

The center noted that it had been several days since the little owl had a good meal when the bird first arrived.

A worker helping set up the Rockefeller Center Christmas tree found a holiday surprise – a tiny owl among the massive branches. The bird was taken to a wildlife center, which plans to release it back into the wild.https://t.co/UtznR0DgHg

The founder and director of Ravensbeard Wildlife Center, Ellen Kalish, noted that they have plans to release the owl into the wild this weekend.

Meanwhile, many social media folks are roasting this year’s Rockefeller tree saying that it looks rather pathetic this year.

Even the Rockefella tree looks done with 2020🥴

But, the Rockefella center replied to the critics using some humor, tweeting:

Wow, you all must look great right after a two-day drive, huh? Just wait until I get my lights on! See you on December 2! 😉

You can watch a video featuring the adorable owl below.